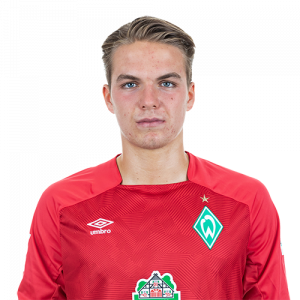 Luca Bastian Plogmann (born 10 March 2000) is a German professional footballer who plays as a goalkeeper for Werder Bremen.

Aged 18, Plogmann received his first call-up to Werder Bremen’s first team squad for a match against Wormatia Worms on 18 August 2018 in the first round of the DFB-Pokal with three of the side’s other goalkeepers, Stefanos Kapino, Michael Zetterer and Jaroslav Drobný, injured. He made his professional debut on 1 September in a Bundesliga match against Eintracht Frankfurt. He was brought onto the field after first-choice goalkeeper Jiří Pavlenka injured himself while conceding a penalty.

In August 2020, Plogmann extended his contract with Werder Bremen and joined 3. Liga side SV Meppen, managed by former Werder Bremen player Torsten Frings, on a season-long loan. He started the season as Meppen’s first-choice goalkeeper, but suffered a severe knee injury on his 8th appearance for the club in a match against Dynamo Dresden on 31 October 2020 and was ruled out for several months after undergoing surgery. As a result, the loan was cut short in February 2021 and Plogmann returned to Werder Bremen to continue his rehabilitation.