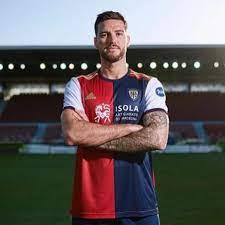 Luca Ceppitelli (born 11 August 1989) is an Italian professional footballer who plays for and captains Serie A side Cagliari as a defender.

Perugia
Born in Castiglione del Lago, in the Province of Perugia, Umbria, Ceppitelli started his career at hometown club Perugia. He played once in 2006–07 Serie C1 season for the central Italy team, the last round of the season.

Andria
In January 2009 he left for southern Italy side A.S. Andria BAT in co-ownership deal, which the team represented the Province of Barletta–Andria–Trani, Apulia. Perugia also re-signed Giampaolo Giuliacci from Andria. In June 2009, Andria purchased him outright.

In 2009–10 Lega Pro Prima Divisione season, he made 15 starts with Andria, plus 1 start in the relegation tie-breaker. That season he also received three call-up from Italy national under-20 football team, one for training camp, Four Nations Tournament, one for unofficial friendly against Serie D Best XI. He did not played the both matches. He also received a call-up to represent Prima Divisione Group B for a trophy against Group A’s under-21 representative team. As the starting defender of the team in 433 formation he lost the match with the team.

Bari
On 30 August 2010, Serie A team Bari signed Ceppitelli (also located in Apulia) along with two other youth team players of Andria (R.Moretti & Leonetti). However, he spent the first season loaned back to Andria.

Parma
On 1 July 2014, Ceppitelli formally became a player of Parma, after the co-ownership deal was renewed in June 2014. Ceppitelli participated in pre-season friendlies.

Cagliari
On 7 August 2014, he was sold to fellow Serie A club Cagliari from Parma and Bari for €2.1 million. Bari received €1 million for their portion.