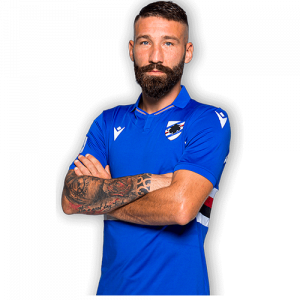 Lorenzo Tonelli (born 17 January 1990) is an Italian professional footballer who plays as a central defender for Serie A club Sampdoria on loan from Napoli.

Born in Florence, Tuscany, Tonelli started his professional career at Empoli. He made his debut during the 2010–11 Serie B season. He made his first appearance on 5 September 2010.

On 26 April 2015, Tonelli was punched by Atalanta’s Germán Denis after he burst into the Empoli dressing room; Denis was subsequently given a five match ban for this action on Tonelli.

Tonelli enjoyed his breakthrough in the 2014–15 season under then manager Maurizio Sarri, attracting the attention of some of the top Italian teams. On 23 May 2016, it was announced that Tonelli had signed for Napoli. The transfer fee was reported as being €10 million. On 7 January 2017, Tonelli made his Napoli debut, scoring the match-winning goal in the 95th minute of a 2–1 home win over Sampdoria.

On 23 January 2020, he joined Sampdoria on another loan until the end of the 2019–20 season, at the end of which Sampdoria will have an obligation to purchase his rights permanently. He also signed a contract with Sampdoria until 30 June 2022.