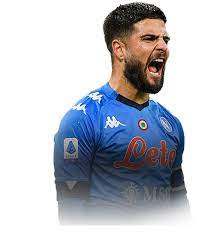 Lorenzo Insigne (born 4 June 1991) is an Italian professional footballer who plays as a forward for Serie A club Napoli, for which he is captain, and the Italy national team.

Insigne began his professional career with Napoli in 2009, making his Serie A debut in 2010, but was later sent on consecutive season loan spells to Cavese, Foggia and Pescara, before returning to Napoli in 2012. Insigne is capable of playing on either flank, or through the centre, but is usually deployed as left winger. He is known in particular for his creativity, speed and technical ability, as well as his accuracy from free-kicks.

Insigne has represented the Italy national under-21 team, with which he won a runner-up medal at the 2013 UEFA European Under-21 Championship. He made his debut for the senior team in September 2012, and has represented Italy at the 2014 FIFA World Cup and UEFA Euro 2016.

At the end of the season, Insigne returned to Napoli, choosing the number 24 jersey. On 16 September 2012, he scored his first goal in Serie A, after entering as a substitute for Edinson Cavani in a 3–1 home win over Parma.
The following season, Insigne made his UEFA Champions League debut in 2–1 home win over the previous season’s finalists Borussia Dortmund, on 18 September 2013. Insigne marked his debut in the competition with a goal from a free-kick.[18] In the final of the Coppa Italia on 3 May 2014, Insigne scored twice in the first half as his side won 3–1 against Fiorentina.
During the 2014–15 season, on 9 November 2014, Insigne injured the anterior cruciate ligament of his right knee in a match against Fiorentina. He returned to the pitch on 4 April 2015 after a five-month absence, coming on as a substitute in a 1–0 away defeat to Roma.
On 13 September 2015, Insigne opened the 2015–16 Serie A season by scoring in a 2–2 draw against Empoli. On 20 September, he scored again in a 5–0 win over Lazio, also setting up Allan’s goal.
In April 2017, Insigne scored his third brace in four appearances for Napoli to take his tally to 14 goals for the Serie A season, surpassing his previous personal best for a single campaign.
On 14 October 2017, Insigne scored his 100th career club goal in a 1–0 away win over rivals Roma in Serie A.
On 13 June 2020, Insigne assisted Dries Mertens’s equalising goal in a 1–1 home draw against Inter Milan in the second leg of 2019–20 Coppa Italia semi-final; the goal saw the Belgian overtake Hamšík to become Napoli’s outright all-time leading goalscorer with 122 goals, while the result also allowed Napoli to advanced to the Coppa Italia Final. In the final on 17 June, Insigne netted Napoli’s first spot-kick in a 4–2 penalty shoot-out victory against Juventus following a 0–0 draw after regulation time; Insigne went on to lift the trophy as the club’s captain.