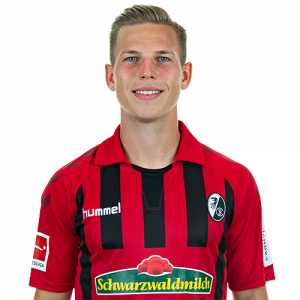 Lino Tempelmann (born 2 February 1999) is a German professional footballer who plays as a midfielder for SC Freiburg.

Career
Tempelmann played in the youth division for the Munich clubs FC Bayern, SpVgg Unterhaching and TSV 1860. For TSV 1860 he made six appearances in the Regionalliga Bayern at the beginning of the 2017/18 season, but left the club at the end of August 2017 to join SC To switch to Freiburg. There he played the rest of the season for the club’s U19s, in 2018 he was promoted to the regional league team, but was absent for months after a knee operation that became necessary in February 2018. For the 2019/20 season he was accepted into the Freiburg Bundesliga squad and was in the starting line-up in October 2019 on the occasion of a home game against RB Leipzig.

His Bundesliga debut lasted just 34 minutes before he was replaced by Vincenzo Grifo.