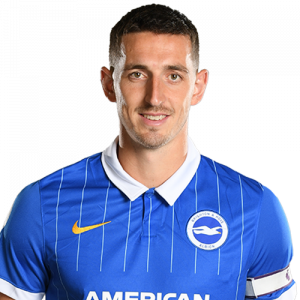 Lewis Carl Dunk (born 21 November 1991) is an English professional footballer who plays as a centre-back for Premier League club Brighton & Hove Albion, whom he captains, and the England national team.

Aside from a brief loan spell at Bristol City in 2013, Dunk has spent the entirety of his career at Brighton, with whom he turned professional in 2010.

In the 2016–17 season, Dunk achieved promotion to the Premier League with Brighton and was named in the Championship team of the year. He became the club’s captain from the 2019–20 season.

Despite failing to be capped at youth level, Dunk made his senior England debut on 15 November 2018 against the United States.

Dunk played the full 90 minutes, and scored an own goal, in Brighton’s first ever Premier League match, a 0–2 home defeat to Manchester City. Five days later, on 17 August 2017, he signed a five-year contract extension, keeping him until 2022. In the absence of Bruno, Dunk took over the captaincy. On 24 February 2018, Dunk scored his fourth own goal of the season in a 4–1 home win over Swansea City, which brought him level with Martin Škrtel at the top of the list of most own goals in a season in the Premier League.He scored his first Premier League goal in a 2–1 victory over Arsenal on 4 March 2018. Dunk played in every match in Brighton’s debut season in the Premier League, as the club finished in 15th place and amassed 40 points. He finished second place for the club’s Player of the Year behind Pascal Groß.