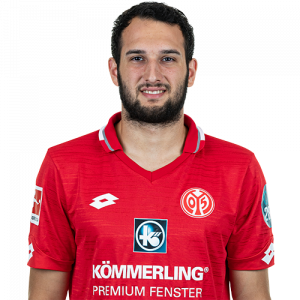 Levin Mete Öztunalı (born 15 March 1996) is a German professional footballer who plays as a midfielder for Mainz 05.

Following seven years in the academy of Hamburger SV, Öztunalı made his senior debut with Bayer Leverkusen in 2013. He made 15 league appearances for the club before joining Werder Bremen on a season-and-a-half loan deal two years later. Following the expiration of the loan in 2016, Öztunalı joined current club Mainz.

On 25 August 2016, Leverkusen’s Bundesliga rivals Mainz 05 announced the signing of Öztunalı on a five-year deal. He made his debut against Borussia Dortmund on 27 August, coming on as a second half-substitute for Suat Serdar, and scored his first goal for the club in the following match-week in a 4–4 draw with Hoffenheim. He scored his first ever European goal on 29 September, netting the winner in a 3–2 UEFA Europa League victory over Azerbaijani side, Qabala. He ultimately made 36 appearances in the season across all competitions, including 23 starts and five goals in the league as Mainz narrowly avoided the relegation play-offs.