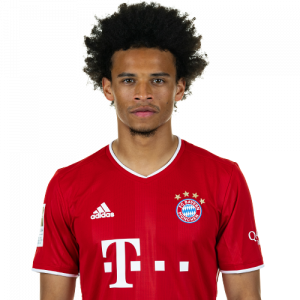 Leroy Aziz Sané (born 11 January 1996) is a German professional footballer who plays as a winger for Bundesliga club Bayern Munich and the German national team.

He made his professional debut for Schalke 04 in 2014 and transferred to Manchester City in 2016 for an initial £37 million fee. He was voted PFA Young Player of the Year in 2017–18 after helping City win the Premier League and EFL Cup, a feat the side bettered by winning a domestic treble the following season.

Sané made his senior international debut for Germany in November 2015 and was part of their squad that reached the semi-finals of UEFA Euro 2016.

On 3 July 2020, Bayern Munich agreed to sign a five-year deal with Sané for an initial €45 million with add-ons rising to a potential €60 million.

Sané scored on his Bundesliga debut in an 8–0 win against former club FC Schalke 04. On 3 November 2020, Sané scored his first Champions League goal for Bayern Munich in a 6–2 away win over Red Bull Salzburg in the 2020–21 season.