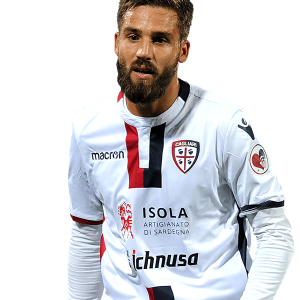 Leonardo Pavoletti is an Italian footballer who plays as a striker for Serie A club Cagliari and the Italy national team.

On 30 August 2017, Pavoletti joined Cagliari on loan, with an obligation to buy at the end of season, for €10 million plus bonuses, making him the club’s most expensive acquisition ever. He signed a 1+4-year contract, which included a €1 million annual salary plus bonuses. He made his club debut on 11 September against Crotone in a 1–0 home victory, and scored his first goal for the club in a 2–3 loss at home to his former club Genoa on 15 October. He finished his first season with the club with 11 goals in 33 appearances in Serie A, nine of which were headers, the most headed goals scored by any player in one of Europe’s major leagues throughout the 2017–18 season.

On 25 August 2019, Pavoletti was stretchered off just before half-time in an eventual 1–0 home defeat to Brescia in Cagliari’s opening league match of the season; it was later revealed that he had injured the ACL and meniscus in his right knee, and would be ruled out for at least three months.