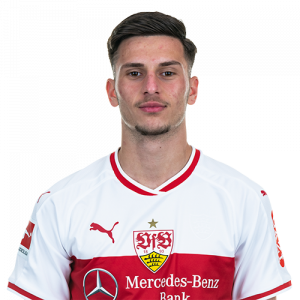 Leon Dajaku (born 12 April 2001) is a German professional footballer who plays as a forward for Union Berlin, on loan from Bayern Munich.

VfB Stuttgart
Dajaku began his youth career with Spvgg Rommelshausen and FSV Waiblingen, before moving to the youth team of VfB Stuttgart in 2014.

Dajaku made his professional debut for VfB Stuttgart in the Bundesliga on 9 December 2018, coming on as a substitute in the 75th minute for Anastasios Donis in the 0–3 away loss against Borussia Mönchengladbach.

Bayern Munich
On 16 July 2019, Dajaku joined Bayern Munich on a four-year contract. He was subsequently assigned to the reserve team in the 3. Liga. On 21 December 2019, he made his first team debut in a Bundesliga 2–0 home win against VfL Wolfsburg.

Loan to Union Berlin
On 16 January 2021, Dajaku signed a six-month loan deal with Union Berlin with the option to purchase.