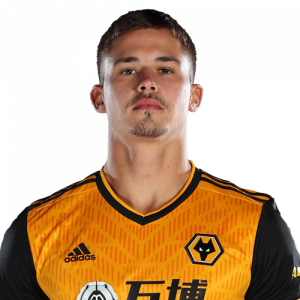 Leander Dendoncker (born 15 April 1995) is a Belgian professional footballer who plays as either a defender or defensive midfielder for Premier League club Wolverhampton Wanderers and Belgium national team.

He joined Anderlecht in 2009 and made his professional debut in July 2013, going on to play 171 games for the club and score 11 goals. He won two Belgian Super Cups and a Belgian First Division A title. He made his senior international debut for Belgium in June 2015 and was part of their squad that finished third at the 2018 FIFA World Cup.

On 9 August 2018 Dendoncker moved to newly promoted English Premier League club Wolverhampton Wanderers on an initial season-long loan with an obligation on Wolves to make the player a permanent Wolves signing in summer 2019. He made his debut on 28 August in the second round of the EFL Cup away to Sheffield Wednesday (2–0 victory), with coach Nuno Espírito Santo making nine changes from the previous game. In late September, The Football Association rejected the obligatory purchase clause in Dendoncker’s Wolves contract and made his deal became permanent for €15 million.

He finally made a league appearance on 5 December in a 2–1 win against Chelsea, playing the final nine minutes in place of goalscorer Raúl Jiménez, and scored his first Premier League goal on his sixth appearance in the competition, in a 1–3 win at Everton on 2 February 2019.

Dendoncker committed a foul in the Wolves penalty area with just 180 seconds remaining of Wolves’s April 2019 FA Cup semi-final with Watford at a time when Wolves were leading the tie 2–1 and thereby conceded the penalty that enabled Watford to draw the game at the end of normal time (at 2–2), then win in extra time. However on 4 May he scored the only goal of a home win over Fulham, which enabled Wolves to make the Europa League as a result of Watford losing the cup final.

Dendoncker became a permanent Wolves signing on 1 July 2019, his original loan agreement having included an obligation on the club to sign him permanently at the end of the original season-long loan period. Following the introduction of Video Assistant Referees (VAR) by the Premier League for the 2019–20 season, he was the first Wolves player to have a ‘goal’ ruled out using VAR in a league match during Wolves’ opening fixture away to Leicester City on 11 August.

On 14 December 2020, it was announced by Wolverhampton Wanderers that Dendoncker had extended his contract with the club until 2023, with an option of a further twelve months available to the club.

Dendoncker made his 100th competitive appearance for Wolves in an F.A. Cup 4th Round tie away to non-league Chorley on 22 January 2021, a game Wolves won 1–0. He scored his first goal of the 2020–21 season in a home league game against West Ham United on 5 April 2021.