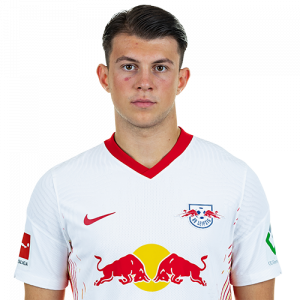 Lazar Samardžić (born 24 February 2002) is a German professional footballer who plays as a midfielder for RB Leipzig. Although a central midfielder, he can also play as a left winger.

Senior career
Samardžić was announced to have signed a professional contract, and first appeared as an unused substitute for the professional team in a 3–3 away draw against Fortuna Düsseldorf on 28 February 2020.

Samardžić made his debut for Hertha BSC in the Bundesliga on 22 May 2020, coming on as a substitute for Per Ciljan Skjelbred in the 81st minute of the Berlin derby against Union Berlin, which finished as a 4–0 win. Samardzic is considered one of Germany’s most talented prospects and he had attracted serious interest from elite clubs around the world, such as Chelsea, Barcelona and Juventus.

On 8 September 2020, Samardžić joined fellow Bundesliga side RB Leipzig on a five-year deal.He made his RB Leipzig debut on 3 October, coming off the bench in a 4-0 win against FC Schalke 04.