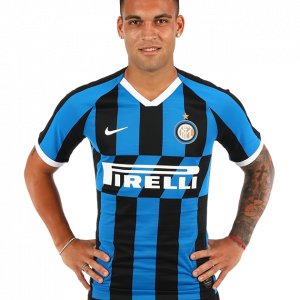 Lautaro Javier Martínez (born 22 August 1997) is an Argentine professional footballer who plays as a striker for Serie A club Inter Milan and the Argentina national team.

He began his football career in his native Argentina where he made his senior debut in 2015 with Racing Club. There he spent four seasons and represented the club in the league and Copa Libertadores, scoring 27 goals in 60 appearances before joining Inter in 2018.

Martínez also previously represented Argentina at various youth levels and competed at the 2017 South American U-20 Championship and 2017 FIFA U-20 World Cup. He made his senior international debut in 2018, and represented the senior squad at the 2019 Copa América, helping his team to a third place finish in the competition.

Martínez officially joined Inter on 4 July 2018 for a reported fee of €22.7 million and he signed a five-year contract with the club. He made his unofficial debut ten days later and scored in a 3–0 friendly win over Swiss club, Lugano. His full debut followed on 19 August when he started in a 1–0 Serie A loss to Sassuolo in the opening week. He scored his first league goal against Cagliari, the opener of a 2–0 win at San Siro on 29 September.

Martínez scored his first European goal on 14 February 2019, netting a penalty to help Inter win against Rapid Wien, in the first leg of 2018–19 UEFA Europa League round of 32. Following this match, he began to start in every match, profiting from Mauro Icardi’s abstence due to personal reasons. In his first Derby della Madonnina match against city rivals Milan, Martínez first assisted Matías Vecino’s header before scoring himself a penalty in the second half, helping Inter to win 3–2; Inter retook the third place in Serie A, and also achieved the first league double over them since 2011–12 season.

On 2 October 2019, Martínez scored his first goal in UEFA Champions League in a 2–1 away defeat to Barcelona in group stage; he became the first player since Roberto Boninsegna in 1970 to score at Camp Nou for Inter. Later in the competition, by scoring a brace in a 3–1 away win against Slavia Prague, Martínez reached two milestones: he became only the fourth Inter player (after Hernán Crespo in 2002, Christian Vieri in 2003 and Samuel Eto’o in 2010) and the fifth Argentinian player (after Hernan Crespo in 2002, Lionel Messi in six occasions, Sergio Agüero in 2019 and Ezequiel Lavezzi in 2013) to score in four consecutive Champions League games. On 17 August 2020, Martínez scored a brace in a 5–0 win against Shakhtar Donetsk to reach the 2020 UEFA Europa League Final.