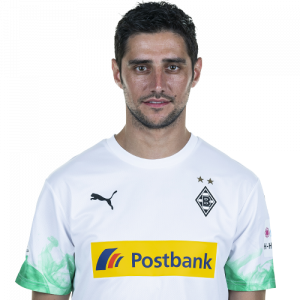 Lars Edi Stindl (born 26 August 1988) is a German professional footballer who plays as an attacking midfielder for Borussia Mönchengladbach, whom he captains, and the Germany national team.

He can also play as a forward. He scored the only goal in the final of 2017 FIFA Confederations Cup against Chile to ensure Germany’s first ever title.

Born in Speyer, Stindl began his career in the youth teams for TSV Wiesental and joined a similar setup at Karlsruher SC in summer 2000. He started his professional career with Karlsruher, making his first appearance on 15 March 2008 in the Bundesliga. He was substituted on in the 81st minute in a 0–1 defeat to Eintracht Frankfurt. On 29 November 2008, Stindl scored his first Bundesliga goal against Hannover 96. In February 2010, he announced his intention to leave Karlsruher. On 16 March 2010, his transfer to Hannover 96 was confirmed.

On 25 March 2015 it was confirmed that Stindl would move to Borussia Mönchengladbach for the 2015–16 season.

Stindl was confirmed as Gladbach’s new captain on 1 August 2016 after the retirement of previous captain Martin Stranzl and the transfer of vice-captain Granit Xhaka to Arsenal.

On 23 February 2017, Stindl scored a hat-trick at ACF Fiorentina’s Stadio Artemio Franchi, as Borussia overturned a 0–3 aggregate deficit to qualify for the UEFA Europa League Round of 16.

On 15 December 2020, Stindl scored a hat-trick against Eintracht Frankfurt in the Bundesliga. Two of the goals came after the 90th minute.