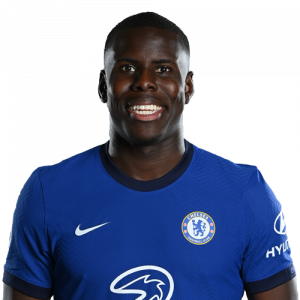 Kurt Happy Zouma (born 27 October 1994) is a French professional footballer who plays as a centre-back for Premier League club Chelsea and the France national team.

Zouma began his career at Saint-Étienne, making his professional debut aged 16, and going on to win the Coupe de la Ligue with the club in 2013. Zouma joined Chelsea for £12 million in January 2014, but was loaned back to the French club for the remainder of the season. In his first full campaign in England, Zouma helped Chelsea win the League Cup and the Premier League. In July 2017, Zouma joined Stoke City on loan for the 2017–18 season. This was followed by another loan move to Everton for the 2018–19 season.

Zouma represented France at several youth levels, up to under-21. He made his senior international debut against Denmark on 29 March 2015.