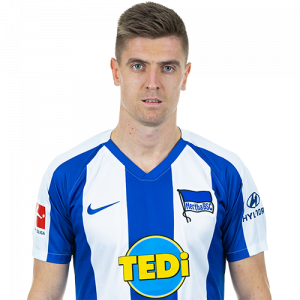 Krzysztof Piątek (born 1 July 1995) is a Polish professional footballer who plays as a forward for Bundesliga club Hertha BSC and the Poland national team.

He began his professional career with Ekstraklasa club Zagłębie Lubin. Over the course of four seasons, he scored 15 goals in 72 appearances for the team, before joining Cracovia in 2016, for whom he scored 32 goals across two seasons. In 2018, Piątek signed for Genoa in Italy’s Serie A. After 19 goals in 21 competitive games in his first half-season, he transferred to A.C. Milan in January 2019, before signing for Hertha BSC a year later.

In January 2020, Hertha BSC announced the signing of Piątek for a reported fee of €27 million, on a long-term contract. He was given the number 7 jersey.