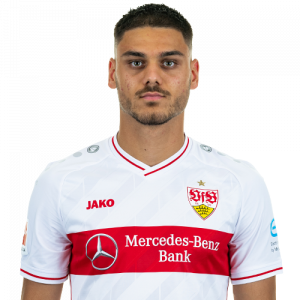 Konstantinos Mavropanos (born 11 December 1997) is a Greek professional footballer who plays as a centre back for Bundesliga club VfB Stuttgart, on loan from Arsenal, and the Greece national team.

PAS Giannina
Born in Athens, Mavropanos began his career with the youth side at Apollon Smyrnis where he stayed for eight years. He then joined Super League side PAS Giannina in January 2016, signing a three-and-a-half-year contract. Mavropanos made his competitive debut for PAS Giannina in the Greek Cup on 29 November 2016. He started and played the full match as PAS Giannina won 1–0.

Loan to 1. FC Nürnberg
On 13 January 2020, after struggling for match time at Arsenal, Mavropanos moved to 2. Bundesliga club 1. FC Nürnberg on loan for the remainder of the 2019–20 season, and the Greek international had been picking up momentum in the heart of the Nuremberg defence with three stellar performances in a row. He won consecutive Man of the Match awards in his second and third game for the club, before making a key goalline clearance in his fourth. On 25 February 2020, Mavropanos picked up an injury playing against Darmstadt 98, but the club didn’t know the exact length of his absence.

Loan to VfB Stuttgart
On 16 July 2020, Mavropanos signed a new deal with Arsenal and joined VfB Stuttgart on a €250.000 loan for the 2020–21 season, reuniting with Sven Mislintat who had originally scouted and signed the player for Arsenal. On 3 October 2020, Mavropanos made his competitive debut for Stuttgart and in the Bundesliga against Bayer Leverkusen, the game ended in a 1–1 draw. On 15 October 2020, Mavropanos suffered the injury during a friendly with SC Freiburg and must undergo an operation on his meniscus in the coming days, presumably facing a lengthy layoff.