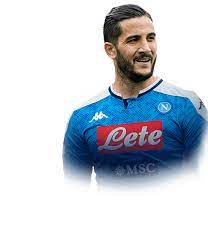 Konstantinos “Kostas” Manolas (born 14 June 1991) is a Greek professional footballer who plays as a centre-back for Serie A club Napoli and the Greece national team.

On 27 June 2019, Manolas was close to a move to Napoli after Roma and Neapolitan club reached a deal for the Greek defender; Manolas agreed to pen a five-year contract with the latter club, with annual earnings of €4.5 million (including bonuses). Napoli officially purchased the defender for €34m plus a €2m signing-on fee, effectively activating his release clause. However, in the agreement between the two Italian sides, Roma purchased defensive midfielder Amadou Diawara for €18m plus €3m in add-ons. Manolas had previous also been linked with Juventus, Milan, and Arsenal. He officially signed for Napoli on 30 June.

On 31 December 2019, Manolas currently of Napoli in Serie A, was included in the Roma Team of the Decade.After transferring from Olympiacos in August 2014, Manolas subsequently starred for Roma, quickly turning into the team’s leading centre-back with his agile, alert and passionate style of game. In the end, Manolas would spend five years at Roma, amassing over 200 official appearances for the Giallorossi across Serie A, the UEFA Champions League and Italian Cup.

On 20 September 2020, Manolas was a starter in a 2-0 away win 2020-21 Serie A opener game against Parma. On 12 January 2021, Napoli have confirmed Kostas Manolas has suffered a first-degree muscle injury. The Partenopei defender was replaced by Nikola Maksimovic after 15 minutes of the 2-1 win against Udinese in Serie A. On 8 February 2021, Napoli have confirmed Kostas Manolas will be out for three weeks, as he suffered a second-degree sprain and damaged the ligament in the right ankle. The Greek defender was substituted at the Marassi and carried out tests this morning at the Pineta Grande clinic.  On 3 March 2021, the Greek defender, in his return to the squad as a late substitute, comes in that could not have been worse, giving Sassuolo a penalty in the final minute, in an away 3-3 draw for the partenopei.