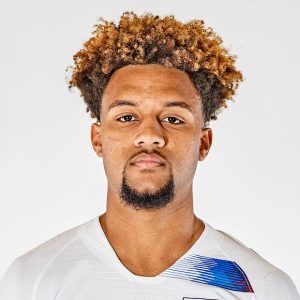 Konrad de la Fuente (born July 16, 2001) is an American professional soccer player who plays as a winger for Spanish team FC Barcelona B.

Youth
De la Fuente was born in Miami, Florida, to Haitian parents of Dominican descent. De la Fuente moved to Spain at the age of 10 when his father took a job at the Haitian consulate in Barcelona. While playing for local youth side CF Damm, he was discovered and offered the chance to play for FC Barcelona. He has developed in Barcelona’s youth system since joining in 2013. De la Fuente holds a Spanish passport.

Barcelona B
He made his debut coming off the bench for the reserves on December 1, 2018, playing 12 minutes against Valencia Mestalla. He conceded a penalty in the final minutes of the game causing his side to go 2–1 down, but fellow teammate Ronald Araújo equalized late, ending the match 2–2.

De la Fuente scored his first goal on February 2, 2020, a stoppage time winner in a 2–1 win after coming on in the 81st minute against AE Prat.

Barcelona
De la Fuente made his Barcelona first team debut against Dynamo Kyiv in the Champions League on November 24, 2020, replacing Francisco Trincão in a 4–0 win.