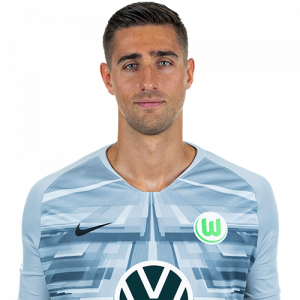 Koen Casteels (born 25 June 1992) is a Belgian professional footballer who plays as a goalkeeper for Bundesliga club VfL Wolfsburg and the Belgium national team.

Formed at Genk, he spent most of his professional career in Germany with 1899 Hoffenheim, Werder Bremen (loan) and VfL Wolfsburg, making over 100 Bundesliga appearances.

Casteels made 37 appearances for Belgium up to under-21 level. He was first called up for the senior team in 2013 and was part of their squad that came third at the 2018 FIFA World Cup.

Casteels was developed at K.R.C. Genk where he was a teammate of fellow goalkeeper Thibaut Courtois. He was initially regarded as better than Courtois, but while he and several of the club’s other goalkeepers were injured, Courtois broke into the team.

Casteels was signed by VfL Wolfsburg from TSG 1899 Hoffenheim in January 2015, but spent the first six months of the three-and-a-half-year contract on loan at Werder Bremen. He played for Wolfsburg in the 2015 DFL-Supercup, saving from Xabi Alonso in the penalty shootout as his team won after a 1–1 draw.

When Diego Benaglio left Wolfsburg in June 2017, Casteels signed a new three-year contract with the club and was given the number 1 shirt. He appeared in all of the club’s 34 Bundesliga matches during the 2017−18 season.