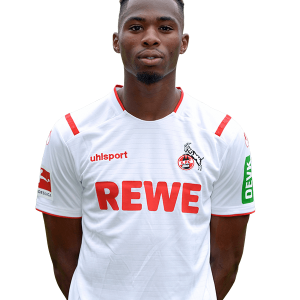 Kingsley Ehizibue (born 25 May 1995) is a professional footballer who plays as a right back for 1. FC Köln.

Born in Germany and raised in the Netherlands, he represents Nigeria internationally.

Early years
Ehizibue was born in Germany to Nigerian parents, but moved to the Netherlands at 2 years of age, growing up in Zwolle. He started playing football at local amateur outfit CSV’28.

Club career
Ehizibue made his professional debut for PEC Zwolle on 29 October 2014 against HHC Hardenberg in a Dutch Cup game and made his Eredivisie debut on 13 December 2014 against Willem II.

On 31 May 2019, it was announced that Ehizibue would be transferred to Bundesliga club 1. FC Köln, where he signed a four-year contract until 2023.