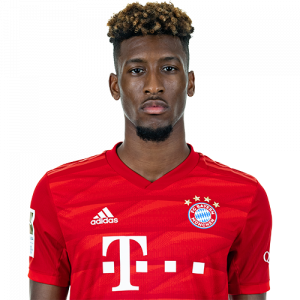 Kingsley Junior Coman (born 13 June 1996) is a French professional footballer who plays as a winger for Bundesliga club Bayern Munich and the France national team.

Trained at Paris Saint-Germain’s academy, Coman moved to Juventus in 2014 on the expiration of his contract, winning the Serie A and Coppa Italia in his first season in Italy. In August 2015, he transferred on loan to Bayern Munich, then permanently, winning five Bundesliga, three DFB-Pokal, four DFL-Supercup and the 2020 UEFA Super Cup. He won the 2019–20 UEFA Champions League by scoring the only goal in the final against Paris Saint-Germain.

Coman earned 39 caps and scored 11 goals in France’s youth teams, from under-16 to under-21 levels. He made his debut for the senior team in November 2015 and represented the nation at UEFA Euro 2016, in which they reached the final.

n the final of the 2019–20 UEFA Champions League on 23 August 2020, Coman headed in the only goal of the game as Bayern secured their sixth Champions League title with a win over Paris Saint-Germain. In doing so, Coman became the first player in the history of the competition to score against a former club in the final.