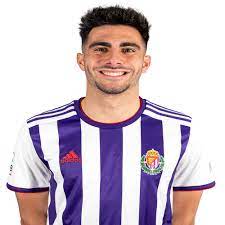 Enrique “Kike” Pérez Muñoz (born 14 February 1997) is a Spanish professional footballer who plays as a midfielder for Real Valladolid.

Born in Gálvez, Toledo, Castilla–La Mancha, Pérez joined Rayo Vallecano’s youth setup in 2013, from EFB Odelot Toletum. He made his senior debut with the reserves on 30 August 2015, starting in a 1–1 Tercera División away draw against CDA Navalcarnero.

Pérez scored his first senior goal on 11 September 2016, scoring his team’s second in a 5–0 home routing of Alcobendas CF. The following 9 August, he signed a two-year contract with Segunda División side CD Lugo, being immediately loaned to farm team CCD Cerceda for one year.

On 4 August 2018, Pérez was loaned to Real Valladolid’s reserves for one year. On 14 June of the following year, he signed a permanent four-year contract with the Blanquivioletas.

Pérez made his first team – and La Liga – debut on 20 June 2020, coming on as a second-half substitute for Matheus Fernandes in a 0–1 loss at Atlético Madrid. On 11 August, he renewed his contract until 2025 and was definitely promoted to the main squad.