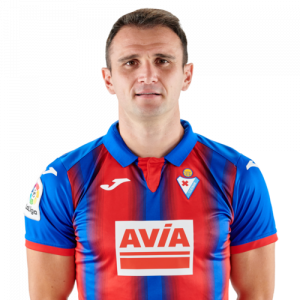 Enrique García Martínez (born 25 November 1989), known as Kike, is a Spanish professional footballer who plays as a striker for CA Osasuna.

He began his career at Real Murcia, competing in five Segunda División seasons before a €3.5 million transfer to Middlesbrough in 2014. After one and a half seasons in the Football League Championship, he returned to Spain with Eibar.

Eibar
The signings of strikers David Nugent and Jordan Rhodes at Middlesbrough led to speculation about Kike’s future at the club, creating extra pressure for him to be included in the starting line-up. After interest from fellow league teams Leeds United and Wolverhampton Wanderers, he left and on 2 February 2016 signed for SD Eibar in the top flight, but a late registration meant that he would be ineligible to play until the following season.

Kike finally made his debut for the Basques on 19 August 2016, starting in a 2–1 away loss against Deportivo de La Coruña. He scored seven goals in his debut campaign – nine across all competitions – helping to a tenth-place finish.

On 1 May 2021, Kike scored all of his side’s goals in the 3–0 home victory over Deportivo Alavés. He totalled 12 for the season, in an eventual relegation as last.

Osasuna
Kike continued in the Spanish top tier in the 2021 off-season, with the free agent joining CA Osasuna on a three-year contract with a €15 million buyout clause.