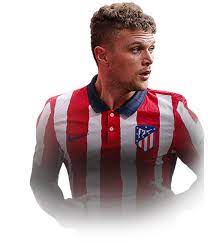 Kieran John Trippier (born 19 September 1990) is an English professional footballer who plays as a right-back for La Liga club Atlético Madrid and the England national team.

Trippier started his career in the youth system at Manchester City but failed to make the breakthrough to the first team, having two loans at Championship club Barnsley. In 2011, he signed for Championship club Burnley on a season-long loan which was made permanent in January 2012 for an undisclosed fee. He was named in the Championship PFA Team of the Year for two consecutive seasons in 2012–13 and 2013–14. In 2014, he secured promotion with Burnley to the Premier League as the team finished runners-up in the Championship. A year later, he signed for Tottenham Hotspur for a £3.5 million fee. After four years in North London, during which he became part of the squad that finished as runners up in the 2019 Champions League final, Trippier joined Spanish side Atletico Madrid, where he helped the team win the 2020–21 La Liga title.

Trippier also represented England at all levels from under-18 to under-21, featuring in the 2009 UEFA European Under-19 Championship and 2009 FIFA U-20 World Cup. He made his senior international debut in June 2017 and was part of the team that reached the semi-finals of the 2018 FIFA World Cup.

Trippier signed for La Liga club Atlético Madrid on 17 July 2019 on a three-year contract, for a fee of £20 million plus add-ons. He became Atlético’s first English player in 95 years. In his debut on 18 August in their opening La Liga match against Getafe, he helped the team to a 1–0 home win by providing an assist for Álvaro Morata’s goal. In December 2020, Trippier was given a 10-week worldwide football ban and fined £70,000 for four breaches of Football Association betting rules after he allegedly passed on information on his transfer to his friends who then placed bets on his transfer. The ban was suspended by FIFA, which dismissed its appeal, until the case is decided by the Court of Arbitration for Sport (CAS). CAS rejected the appeal, and Trippier sat out his ban until his return to the team for the Madrid Derby against Real Madrid on 7 March 2021, which ended in a 1–1 draw.

At the end of the 2020–21 season, Trippier won his first major trophy as Atlético secured the La Liga title on the final day of the season.