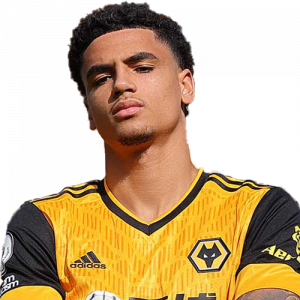 On 19 September 2020, Hoever completed a £9 million transfer to Wolverhampton Wanderers. Hoever made his first appearance in the Premier League, and his debut for Wolves, as a second-half substitute in a 4–0 defeat away to West Ham United on 27 September 2020. He made his debut Molineux appearance for Wolves in the team’s next match, a 1–0 victory in the Premier League over Fulham on 4 October 2020, also as a second-half substitute.

Hoever made his full Premier League debut away to Manchester United on 29 December 2020, a game which Wolves lost narrowly to a deflection in added time.

International career
Born in the Netherlands, Hoever is of Surinamese descent. Hoever is a Netherlands U17 international, scoring three goals in his first five games. He participated in the U17 European Championships in Ireland in 2019, a tournament which the Netherlands won. Hoever started as the Netherlands beat Italy in the final with a scoreline of 4–2, a game which saw Hoever hit the post from a free-kick, which provided the assist for the Dutch’s second goal.