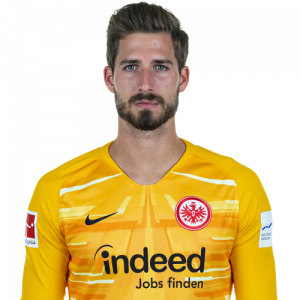 Kevin Trapp (born 8 July 1990) is a German professional footballer who plays as a goalkeeper for Bundesliga club Eintracht Frankfurt and the Germany national team.

He began his professional career at 1. FC Kaiserslautern, where he took part in two Bundesliga seasons. In 2012, he signed for Eintracht Frankfurt for a fee of €1.5 million and played regularly over three years, also competing in the UEFA Europa League. He joined Paris Saint-Germain for an estimated €10 million in 2015, where he won several domestic honours.

Trapp won 26 caps for Germany’s youth teams, including 11 for the under-21s, and made his full debut in June 2017. He was part of their squad that won the 2017 FIFA Confederations Cup and also competed at the 2018 FIFA World Cup.

After a successful loan spell, Trapp re-signed with Eintracht Frankfurt on 7 August 2019 on a five-year deal worth €7 million. Trapp’s first game after signing for the club on a permanent basis came in the opening game of the season against Hoffenheim, where he kept a clean sheet, in a 1–0 win. Trapp then played in both legs of the UEFA Europa League Play–Off Round against RC Strasbourg, as he helped the side win 3–1 on aggregate to send them through to the Group Stage. However, during a 2–1 win against Union Berlin on 27 September 2019, Trapp suffered a shoulder injury that kept him for the rest of 2019. It wasn’t until on 18 January 2020 when he returned to the starting line–up, in a 2–1 win against Hoffenheim. Since returning from injury, Trapp regained his place as the club’s first choice goalkeeper for the rest of the 2019–20 season. His return was praised by the German and the club’s manager Adi Hütter. Despite the season being suspended due to the COVID-19 pandemic, he finished the 2019–20 season, making thirty–three appearances in all competitions.