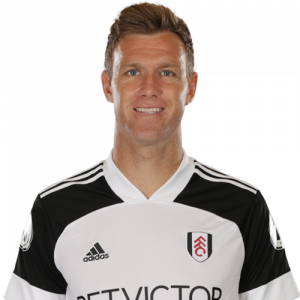 Kevin David McDonald (born 4 November 1988) is a Scottish professional footballer who plays as a midfielder for Premier League club Fulham.

He began his career with Dundee before moving to England to sign for Burnley, for whom he played one season in the Premier League. He spent two full seasons with Sheffield United before moving to Wolverhampton Wanderers in 2013 where he spent three seasons. McDonald signed for Fulham in 2016 and made his full international debut for Scotland in March 2018.

Dundee
Born in Carnoustie, McDonald was initially signed as a youngster by Dundee and worked his way into the first team for the Scottish Championship side. He had been the subject of a £75,000 bid from Celtic in June 2006 which was rejected by Dundee.

Burnley
Burnley eventually had a second offer of £500,000 accepted, and McDonald was signed on a three-year deal, scoring his first goal for the club in a 3–0 win over Derby County at the end of November 2008.

Sheffield United
At the end of the 2010–11 season McDonald was released by Burnley and undertook a trial with League One Sheffield United leading to a one-year contract with the South Yorkshire club.

McDonald playing for Wolverhampton Wanderers in 2014
On 14 August 2013 McDonald moved to fellow League One club Wolverhampton Wanderers, signing a three-year contract for an undisclosed fee (reported to be £750,000). After making his Wolves debut as a substitute in a 2–1 win at Bristol City on 17 August 2013, he scored his first goal two weeks later in a 3–1 win at Port Vale on 31 August.

Fulham
Despite his new contract agreement with Wolves, McDonald eventually moved to Fulham after the 2015–16 season, signing for the London club on 22 July 2016 for an undisclosed fee in a three-year deal (with the option of an additional year). He scored his first goal for Fulham in a 2–2 draw with Cardiff City on 20 August 2016.

In March 2021, McDonald stated that he will receive a kidney transplant in April 2021 which may end his playing career prematurely. McDonald has been unable to play for Fulham during the 2020–21 season, turning down opportunities to go out on loan due to his illness.