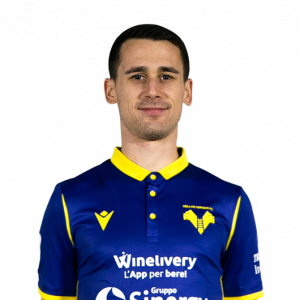 Kevin Lasagna (born 10 August 1992) is an Italian professional footballer who plays as a striker for Serie A club Hellas Verona, on loan from Udinese, and the Italy national team.

Early career
Born in San Benedetto Po, Lasagna started his career with Governolese near his home town. In 2012, Lasagna signed for Serie D team Cerea and scored 7 times in 35 games throughout the 2012–13 season. Lasagna joined Este for the 2013–14 and scored 21 times in 33 games making him one of the most sought after players of the lower leagues.

Carpi
In July 2014, Lasagna joined Serie B side Carpi. Lasagna made his Serie B debut on 13 September, as a substitute in the 1–1 draw against Crotone. On 15 November 2014, Lasagna scored his first Carpi goal, wrapping up a 5–2 win against Cittadella, to send Carpi to the top of Serie B.

In January 2017, it was announced that Lasagna would join Udinese for the 2017–18 season and finish the 2016–17 season with Carpi. Udinese reportedly paid Carpi a transfer fee of €4.5 million plus possible bonuses.

Udinese
Lasagna scored on his debut for Udinese, a 3–2 cup win against Frosinone on 12 August 2017. His first Serie A goal came on 17 September, in a 2–1 loss to Milan. In December, he scored in five consecutive league matches, becoming the first Udinese player to do so since Antonio Di Natale in 2010. He concluded his first season with 14 goals in 32 appearances.

Lasagna was named club captain in 2019, following the departure of previous captain Valon Behrami from the team. In December 2020, he was replaced in that role by Rodrigo De Paul.

Verona
On 26 January 2021, Lasagna joined Hellas Verona on a one-and-a-half-year loan deal containing a conditional obligation to buy based on his performances.