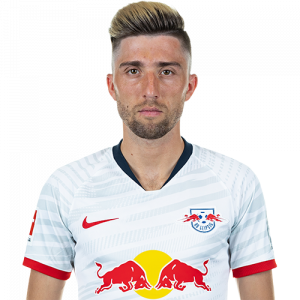 Kevin Kampl (born 9 October 1990) is a professional footballer who plays as a midfielder for Bundesliga club RB Leipzig. Born in Germany, he represented Slovenia at international level.

On 30 August 2010, he signed a one-season loan contract with SpVgg Greuther Fürth. Kampl made his first team debut on 29 October 2010 as a late substitute in a 2. Bundesliga tie with Erzgebirge Aue. After only half a season for Greuther Fürth, he returned to Bayer Leverkusen during the 2010–11 winter transfer window. Kampl made his Leverkusen 2010–11 season debut as a second-half substitute in the UEFA Europa League game against Metalist Kharkiv.

Borussia Dortmund
On 22 December 2014, it was announced that he would join Borussia Dortmund on a five-year contract for a €12 million fee on 1 January 2015. He was originally going to RB Leipzig. He made his debut on 31 January 2015. On 28 April 2015, in the DFB-Pokal semi–final against Bayern Munich, Kampl came on in the 83rd minute for Jakub Błaszczykowski and was sent–off after receiving a second yellow card; Dortmund went through to the final via a penalty shoot-out.

RB Leipzig
On 31 August 2017, Kampl joined RB Leipzig on a four-year contract for a transfer fee of €20 million.