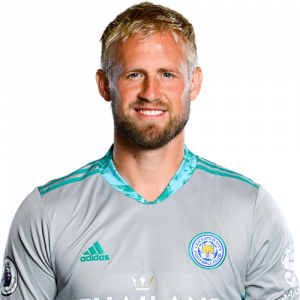 Schmeichel began his career with Manchester City, but he had loan spells with Darlington, Bury and Falkirk before he made his Manchester City debut. Although Schmeichel appeared to have made the City number 1 jersey his own at the start of the 2007–08 season, the emergence of Joe Hart resulted in Schmeichel being loaned to Cardiff City. The signing of Republic of Ireland international Shay Given in January 2009 meant that Schmeichel fell even further down the pecking order at City, and in August 2009, he was allowed to link up with former manager Sven-Göran Eriksson at Notts County. He spent only one season with the Magpies as, while it was a very successful one for the club and the player himself, changes to the club’s financial position made his departure necessary and his contract was terminated by mutual consent. He joined Leeds United in May 2010, but again, his tenure at the club would only last one season before he was the subject of a transfer to Leicester City, where he would again work under Eriksson. Schmeichel has gone on to play over 400 competitive games for Leicester, winning the Championship in the 2013–14 season and the Premier League in 2015–16.

chmeichel is the son of former Denmark international goalkeeper Peter Schmeichel. Schmeichel is of Polish descent through his paternal grandfather. Having spent most of his childhood living in England due to his father’s playing career, Kasper is a native speaker of both Danish and English, the latter of which he speaks with a Northern-English accent. He attended Hulme Hall Grammar School in Cheadle Hulme, Stockport, Greater Manchester, and he also attended Saint Julian’s School in Portugal while his father played for Sporting CP in Lisbon. When Alex Bruce, son of Kasper’s father’s former Manchester United teammate Steve Bruce, joined Kasper at Leeds United, the move saw the two players re-unite after both had previously played football together on the streets as children after school.