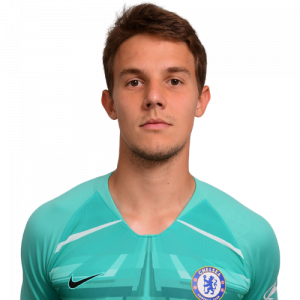 Karlo Ziger is a Croatian goalkeeper who joined Chelsea Academy in July 2017.

A strong keeper and good shot-stopper, he is always hard to beat and has a fantastic work ethic and attitude to continually develop his game. He made 12 appearances during his maiden season in the Under-18s, making his FA Youth Cup debut – and a clean sheet – in our semi-final second leg win over Birmingham City.

The Zagreb-born teenager signed a first professional contract at the club in July 2018, a three-year deal that expires in the summer of 2021. While playing most of his football for the youth team in 2018/19, the teenager made headlines for his penalty heroics against his countrymen Dinamo Zagreb in the UEFA Youth League quarter-finals.

2019/20 saw Ziger join up with Andy Myers’ development squad and play all of his football for the older age group, making 12 starts and keeping five clean sheets.