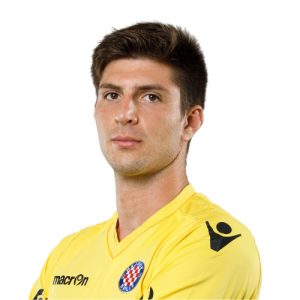 Karlo Letica (born 11 February 1997) is a Croatian footballer who plays for Belgian club Club Brugge as a goalkeeper.

Letica kicked off his career with Hajduk Split in 2015 after arriving to the academy in 2008. He spent the initial years in loan spells. His first loan spell came in February 2015, when he joined NK Mosor of the third tier along with five other Hajduk players. His second loan spell was to NK Val of the same tier. In August 2016, he was loaned off again, this time to second tier club Rudeš where he made his debut in the Croatian Football Cup qualifiers.

In August 2017, Letica made his debut for Hajduk when he featured in a 1–0 league victory against Slaven Belupo where he kept a clean sheet. On 11 March 2018, Letica scored his first professional goal in injury time against Istra 1961 for a 3-2 victory.

On 20 August 2019, Letica joined Italian Serie A club SPAL on loan with an option to buy.

International career
Letica was a part of the Croatia U19 team that played in 2016 UEFA European Under-19 Championship. In August 2017, he was called to the Croatia U21 fot matches against Moldova and Austria. He made his debut against Austria which ended in a 1–1 draw.