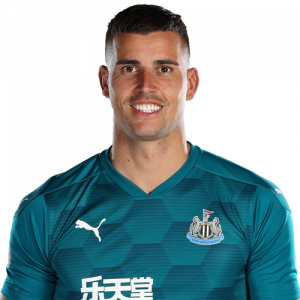 Karl Darlow (born 8 October 1990) is an English professional footballer who plays as a goalkeeper for Premier League club Newcastle United. He is the grandson of former Wales international forward Ken Leek who was part of the Welsh 1958 World Cup squad. Darlow is a product of the Aston Villa and Nottingham Forest academies and spent time on loan at both Newport County and Walsall earlier in his career.

After starting the 2018–19 season as second choice behind Dúbravka, Darlow made his first appearance of the season on 29 August 2018, when he started in the EFL Cup 3–1 defeat against his former club Nottingham Forest. On 11 September 2020, he signed a five-year extension to his contract that would keep him at the club until 2025.

In addition to England, Darlow is eligible to represent Wales as his grandfather Ken Leek (a Wales international forward) was born in Ynysybwl. The Football Association of Wales confirmed Darlow had declined an invitation to join the Wales national football team squad for the friendly match versus Austria on 6 February 2013.

New Wales Manager Ryan Giggs approached Darlow in March 2018 to be part of his Wales squad, but Darlow advised he was currently concentrating on winning his place back in the Newcastle United starting lineup.