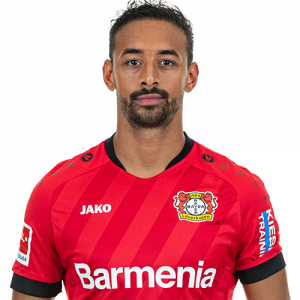 Karim Bellarabi (born 8 April 1990) is a German professional footballer who plays as a winger for Bundesliga club Bayer Leverkusen and the Germany national team.

In 2008, Bellarabi joined the under-19 side of Eintracht Braunschweig. He made his senior debut for them during the 2008–09 season, followed by two more appearances during the 2009–10 league campaign. He finally became a regular starter during the 2010–11 3. Liga season and attracted notice due to his performance.

After the season, he left Braunschweig for Bundesliga side Bayer 04 Leverkusen. Due to injury, Bellarabi missed most of the 2012–13 Bundesliga season. In 2013, he returned from Leverkusen to Eintracht Braunschweig, by now playing in the Bundesliga as well, on a one-year loan deal.

In July 2018 he collapsed in a pre-season friendly.

On 13 August 2020, he extended his stay at the BayArena until 2023 amid interest from other clubs.