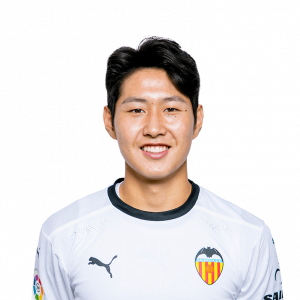 Lee was the Asian Football Confederation’s Asian Young Footballer of the Year in 2019, the same year that he won the 2019 FIFA U-20 World Cup’s Golden Ball award. Lee’s team finished runner-up during the event. He also won the Copa del Rey with Valencia during that season.

Valencia B
Lee joined Valencia’s academy in July 2011. On 15 December 2017, he was called up to Valencia B (Mestalla). He had his debut on 21 December 2017, in a match with Deportivo Aragón, being substituted in the 82nd minute.

He had his first assist on 17 February 2018, against Llagostera, being substituted in at the 76th minute and assisting in extra time. He had his first goal on 6 May 2018, starting against Sabadell.

Valencia
2018–19 season
He made his first team debut on 30 October 2018, starting and playing 83 minutes in a 2–1 win over Ebro in the Copa del Rey, becoming the youngest Korean footballer to debut professionally in Europe.

Lee made his La Liga debut on 12 January 2019, substituting in for Denis Cheryshev in the 86th minute in a 1–1 draw with Real Valladolid during 2018–19 season. At 17 years, 10 months, and 24 days, Lee became the second youngest player in the 18–19 La Liga after Ander Barrenetxea from Real Sociedad who debuted at the age of 16 years, 11 months, and 24 days. He also became the youngest ever non-Spanish and the first Asian league debutant for Valencia, as well as the fifth Korean to play in La Liga.