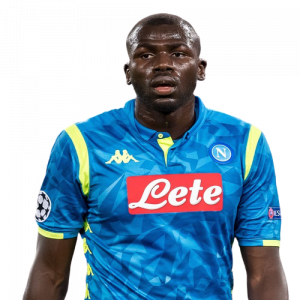 Kalidou Koulibaly (born 20 June 1991) is a professional footballer who plays as centre back for Serie A club Napoli and captains the Senegal national team.

Koulibaly began his professional club career with French team Metz in 2010, before moving to Belgian club Genk in 2012, winning the Belgian Cup in his first season. He joined Italian team Napoli in 2014, where he won the Supercoppa Italiana title; he also won the Coppa Italia in 2020.

As Koulibaly was born in France to Senegalese parents, he was eligible to represent both nations at international level, and initially played for the France national under-20 football team. He later made his senior debut with Senegal in 2015 and was a member of the Senegal squad that took part at the 2017 Africa Cup of Nations. He was named to the side that represented Senegal at the 2018 FIFA World Cup the following year, and subsequently helped his team to the final of the 2019 Africa Cup of Nations.

On 17 June 2020, Koulibaly started in the Coppa Italia Final against Juventus; Napoli won the match 4–2 on penalties after a goalless draw. Koulibaly has on a number of occasions talked about his desire to retire at Napoli, and that a departure would only occur due to an economic decision made by the club.