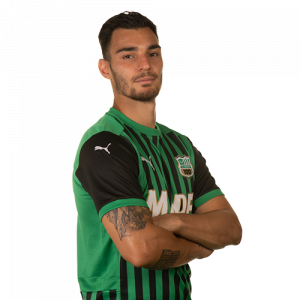 Kaan Ayhan (born 10 November 1994) is a Turkish professional footballer who plays as a defensive midfielder or centre back as well as operating as a right back for the Serie A club Sassuolo and the Turkish national team.

Schalke 04
Ayhan joined Schalke 04’s youth academy when he was four years old. On 18 January 2012, he signed a professional contract with Schalke 04 that would last until 30 June 2015. Ayhan was assigned a number 24 shirt. Ayhan made his debut against FC Augsburg in a 4–1 win on 5 October 2013, coming on as a substitute for Ádám Szalai. On 3 May 2014, Ayhan scored his first Bundesliga goal in the 13th minute of a 2–0 victory at SC Freiburg.

In January 2016, Ayhan joined Eintracht Frankfurt on loan from Schalke for the second half of the season. Frankfurt secured the option of signing him permanently, however, the fixed transfer fee was reported as being too high for a permanent signing to be likely.