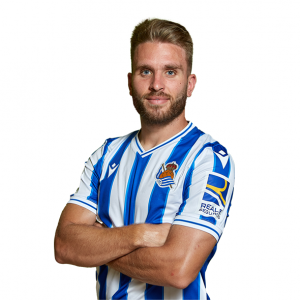 Kévin Manuel Rodrigues (born 5 March 1994) is a professional footballer who plays for Spanish club SD Eibar on loan from Real Sociedad, and the Portugal national team.

Mainly a left back, he can also play as a midfielder.

He spent most of his career in Spain with Real Sociedad, after starting out at Toulouse.

Born in France, Rodrigues originally represented France internationally before switching to Portugal in 2017.

Real Sociedad
Rodrigues signed for Real Sociedad on 4 June 2015, being initially assigned to the reserves in Segunda División B. His first game in La Liga with the first team took place on 29 January 2017, when he started in a 3–0 away defeat to Real Madrid.

On 1 March 2017, Rodrigues renewed his contract until 2020, and was promoted to the main squad ahead of the 2017–18 campaign. He scored his first league goal on 17 September, but also added one in his own net in a 1–3 home loss also against Real Madrid.

On 2 September 2019, after losing space to newcomer Aihen Muñoz, mainly due to injuries, Rodrigues was loaned to fellow top tier side CD Leganés for one year. On 12 September 2020, he moved to SD Eibar of the same league also in a temporary deal.