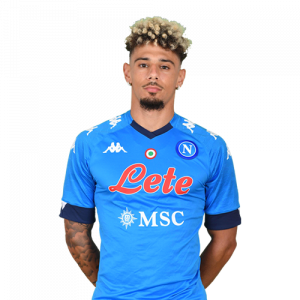 Kévin Malcuit (born 31 July 1991) is a French professional footballer who plays for Serie A side Fiorentina, on loan from Napoli. He predominantly plays as a full-back.

He is also capable of playing in a number of different positions, including as a winger and as an attacker.

Malcuit started his career with Monaco, but after finding his first-team opportunities limited and being sent out on loan to Vannes, he joined Fréjus Saint-Raphaël in the summer of 2012. Good performances in the Championnat National led to a return to professional football with Chamois Niortais in January 2014. During his time at Niort, he was named in the Ligue 2 Team of the Season for 2014–15. He played more than 40 matches in all competitions for the club during an 18-month spell before transferring to Saint-Étienne in August 2015.

Early career
Malcuit was born in Châtenay-Malabry, a suburb of Paris. As a youth he represented Parisian side Racing Club before being scouted by Monaco at the age of 17. At Monaco, he began his senior career, breaking into the professional setup towards the end of the 2009–10 season. He was first included in the match-day squad for the Ligue 1 game against Lorient on 5 May 2010, although he was an unused substitute. He eventually made his debut early the following season, coming on as a late substitute for Vincent Muratori in the 0–0 draw with Toulouse on 18 September 2010. This proved to be his only senior appearance of the campaign, although he was a regular for the reserve side, making 28 appearances in the Championnat de France amateur.

Niort
On 9 January 2014, it was announced that Ligue 2 side Chamois Niortais had signed Malcuit on an 18-month contract after agreeing a fee with Fréjus. He did not break into the first team immediately upon his arrival at Niort, and had to wait until 18 April 2014 to make his debut for the club, when he replaced Tristan Lahaye late in a 1–2 home defeat to Brest at the Stade René Gaillard.

Saint-Étienne
On 28 August 2015, Malcuit joined Saint-Étienne on a four-year contract, for a reported transfer fee of €800,000.

Lille
Malcuit signed a five-year contract with Ligue 1 rivals Lille on 8 July 2017, after being signed by Head Coach Marcelo Bielsa.

Napoli
On 8 August 2018, Malcuit signed to Italian Serie A side Napoli. The transfer fee paid to Lille was reported as €11 million plus possible bonuses.