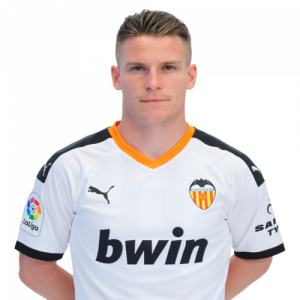 Kevin Dominique Gameiro (born 9 May 1987) is a French professional footballer who plays as a striker for Spanish club Valencia.

He is a strong striker who is known for his clinical finishing, which compensates for his relatively light frame.

Gameiro began his football career playing for clubs along the Oise such as Marly-la-Ville and US Chantilly. In 2004, he moved to the Alsace region to join professional club RC Strasbourg. He made his professional debut in the 2004–05 season and appeared in the UEFA Cup with Strasbourg. After three seasons with the club, in August 2008, Gameiro signed a four-year deal with FC Lorient. With Lorient, he finished his first two seasons with the club as top scorer. In the 2009–10 season, Gameiro contributed to the team that achieved a 7th-place finish; the club’s highest finish in Ligue 1 ever.

Gameiro is a former France youth international, having earned caps at under-18, under-20, and under-21 level. At under-20 level, he played on the team that won the 2007 edition of the Toulon Tournament. Gameiro scored a hat trick in the final and finished the competition as its top scorer. In August 2010, he was called up to the senior team for the first time and made his senior international debut on 3 September 2010 in a match against Belarus.