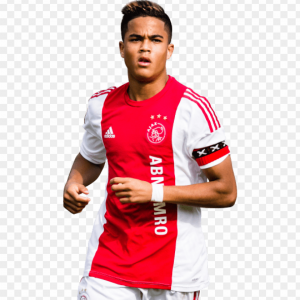 Justin Dean Kluivert (born 5 May 1999) is a Dutch professional footballer who plays as a winger for RB Leipzig, on loan from Roma, and the Netherlands national team.

The son of former Dutch international football player Patrick Kluivert, and grandson of former Surinamese football player Kenneth Kluivert, Justin Kluivert began his career at Ajax, coming through the youth system. After playing for two seasons with the Dutch side, in 2018 Kluivert moved to Italian side Roma for €18.75 million. He also represented the Netherlands internationally, first at youth level from 2013, before making his senior debut in 2018.

Ajax
Born in Amsterdam, Kluivert came through the AFC Ajax youth program, and had his first professional contract with Ajax. He made his Eerste Divisie debut with Jong Ajax on 16 September 2016 in a game against MVV, replacing Vince Gino Dekker in the 67th minute, in a 1–0 away loss. He also played in the 2016–17 UEFA Youth League, in which he scored in a 2–0 group stage win at PAOK on 2 November.

Roma
On 12 June 2018, Kluivert moved to Italian club Roma, following a telephone call made by Roma legend Francesco Totti to his father, for €18.75 million. He became the fifth Dutch player ever to represent the Italian side. Kluivert chose the number 34 shirt number at Roma as a support for his good friend and former teammate Abdelhak Nouri, who wore it at Ajax; Nouri suffered a career-ending cardiac arrhythmia attack in 2017.