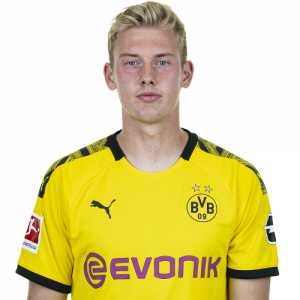 Julian Brandt (born 2 May 1996) is a German professional footballer who plays as a left winger or attacking midfielder for Bundesliga club Borussia Dortmund and the Germany national team.

Brandt made over 55 combined appearances for Germany’s youth teams, playing at every level from U15 to U21. He was a member of the squad that won the UEFA European Under-19 Championship in 2014.

Bayer Leverkusen
In January 2014, Brandt moved to Bayer Leverkusen during the January transfer window for a fee of €350,000, where he signed a professional contract until 2019. He made his professional debut on 15 February 2014 in the Bundesliga against Schalke 04.

Borussia Dortmund
Brandt was Dortmund’s transfer target after the 23-year-old scored seven league goals, provided eleven assists and subsequently helped Leverkusen to finish fourth in Bundesliga and secure a Champions League third qualifying round spot for next season. On 22 May 2019, Brandt completed a transfer to Borussia Dortmund on a five-year deal for a reported €25 million after Dortmund activated a release clause in his contract. He arrived at the same time as new teammate Thorgan Hazard, who moved from Borussia Mönchengladbach.

Brandt scored his first Bundesliga goal for Borussia Dortmund in his first match, a 5–1 against FC Augsburg on the first matchday, coming on as substitute for Thorgan Hazard.