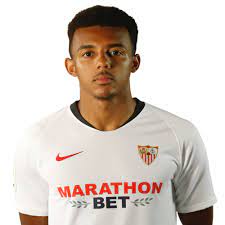 Jules Olivier Koundé (born 12 November 1998) is a French professional footballer who plays as a centre-back for La Liga club Sevilla and the France national team.

Koundé started in his first team debut for Bordeaux in the 2–1 Coupe de France away loss to US Granville in the round of 64 on 7 January 2018, playing the full 90 minutes of normal time and the full 30 minutes of extra time. He started in his Ligue 1 debut for Bordeaux in a 1–0 away win over Troyes on 13 January 2018. On 10 February 2018, Koundé scored the opening goal of a 3–2 Ligue 1 home win over Amiens; it was his first career Ligue 1 goal and his first competitive goal for Bordeaux’s first team.

Sevilla
On 3 July 2019, he signed for Spanish club Sevilla FC. The transfer fee paid to Bordeaux was reported as €25 million.