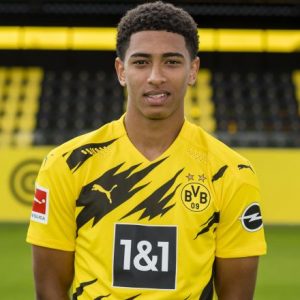 Jude Victor William Bellingham (born 29 June 2003) is an English professional footballer who plays as a midfielder for Bundesliga club Borussia Dortmund and the England national team.

Bellingham joined Birmingham City as an under-8, became the club’s youngest ever first-team player when he made his senior debut in August 2019, at the age of 16 years, 38 days, and played regularly during the 2019–20 season. He joined Borussia Dortmund in July 2020, and in his first competitive match became their youngest ever goalscorer.

He represented England at under-15, under-16, under-17 and under-21 levels and made his first appearance for the senior team in November 2020.

t had long become obvious that Bellingham would leave Birmingham at the end of the season. It was reported that he and his father had visited several major clubs, of which Manchester United and Bundesliga club Borussia Dortmund were the favourites. Impressed by Dortmund’s record of including young players as regulars in the first team, as evidenced by the likes of Jadon Sancho, that became his destination of choice. He flew to Germany for a medical, and the transfer was confirmed on 20 July 2020: he would join after Birmingham’s last match of the season. The undisclosed fee was understood by Sky Sports to be an initial £25 million – making him the most expensive 17-year-old in history – plus “several million more” dependent on performance-related criteria.

Bellingham made his debut on 14 September 2020 in the starting eleven for the first fixture of Borussia Dortmund’s 2020–21 season, against third-tier MSV Duisburg in the DFB-Pokal, at the age of 17 years, 77 days. After half an hour, he scored the second goal in a 5–0 win, and became not only the club’s youngest goalscorer in the DFB-Pokal, taking six days off Giovanni Reyna’s record, but also their youngest scorer in any competitive match, breaking Nuri Şahin’s record by five days. Five days later, he marked his Bundesliga debut with the assist for Reyna’s opening goal in a 3–0 win over Borussia Mönchengladbach, and was named as Bundesliga Rookie of the Month for September. When Bellingham faced Lazio in the group stage on 20 October, aged 17 years and 113 days, he became the youngest Englishman to start a Champions League match, breaking the record previously set by Phil Foden.