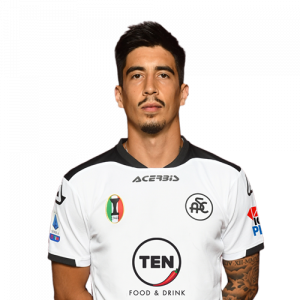 Juan Manuel Ramos Pintos (born 1 September 1996) is a Uruguayan professional footballer who plays as a defender for Serie A side Spezia Calcio.

Catania
Born in Montevideo, Ramos joined Sicilian club Catania in January 2014 from Uruguayan side Montevideo Wanderers. He made his league debut for the Rossazzurri on 24 December 2014 against Cittadella in a 3–2 away defeat. He was handed the number 33 shirt for his first season with Catania.

Casertana
On 27 July 2016, he along with fellow new signings Filippo Lorenzini and Lorenzo Colli were unveiled as Casertana players. Though he did not play, on 31 July, Ramos appeared as an unused substitute for Casertana in their 3–2 home win over Tuttocuoio in the 2016–17 Coppa Italia. He scored his first league goal in a 2–1 away victory against Cosenza on 6 November 2016.

Parma
On 7 July 2017, Ramos joined Parma on a permanent deal from Casertana. He signed a three-year contract with the club.

Loan to Cosenza
Having failed to make a single appearance for Parma, on 30 January 2018, Ramos joined Cosenza on a short-term loan. He managed a total of 10 appearances, before returning to his parent club.

Loan to Trapani
Following his loan spell with Cosenza, Ramos was not viewed as a part of Parma’s plans for their top-flight return, and was sent out on loan to another Serie C side, this time to Trapani for the 2018–19 season. On 18 August 2018, he made his league debut for the Sicilian club on the opening day of the season, starting in a 3–0 home win against Reggina at the Stadio Polisportivo Provinciale. Ramos was again included in Trapani’s starting lineup for Gameweek 2’s away fixture against Vibonese. Trapani won the match by two goals to nil. He also started the third game against Sicula Leonzio. Ramos marked his fourth appearance for the side with a goal against Siracusa to help his team to a 2–1 victory and make it four league wins from four games for Trapani.