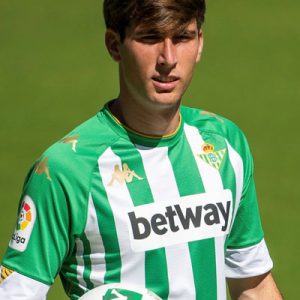 Juan Miranda González (born 19 January 2000) is a Spanish professional footballer who plays as a left-back for Real Betis, on loan from Barcelona.

He will rejoin Real Betis permanently from 1 July 2021, after his contract with Barcelona ends.

Barcelona
Born in Olivares, Seville, Andalusia, Miranda joined Barcelona’s youth setup in June 2014, from Real Betis. After progressing through the youth setup, he made his senior debut with the reserves on 19 August 2017, starting in a 2–1 away win against Real Valladolid for the Segunda División championship.

Miranda scored his first senior goal on 27 January 2018, netting the second in a 3–0 home win against Granada. On 11 December, he made his UEFA Champions League debut for the first team in a 1–1 draw against Tottenham Hotspur.

Loan to Schalke 04
On 30 August 2019, Miranda joined Bundesliga club FC Schalke 04 on a two-year loan deal. On 15 December 2019, he made his Bundesliga debut in a 1–0 home win against Eintracht Frankfurt when he came on for the injured Weston McKennie in the 13th minute. On 1 July 2020, he returned to Barcelona as the loan was ended early.

Real Betis
On 1 June 2021, Barcelona announced that the clause in Miranda’s contract to automatically extend it until 2023 would not triggered, and that and he would join Real Betis permanently once his loan spell ended. Barça will reserve 40% of the rights of any future sale, and a right to first refusal on re-signing Miranda.