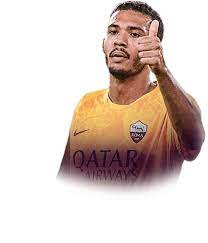 Juan Guilherme Nunes Jesus (born 10 June 1991), usually known as Juan Jesus or simply Juan or Juje, is a Brazilian professional footballer who plays as a defender for Roma.

Internacional
In 2007, Juan Jesus joined the youth team of Sport Club Internacional. He made his debut on the first team in 2010, winning the 2010 Copa Libertadores, and in December 2011, the club sold him for about R$9.26 million (reported €3.8million fee); 65% of the economic rights of Juan went to his agent, Giuliano Bertolucci and 35% to third-party owner DIS Esporte. The owners of the registration rights of Juan, used a Brazilian club Coimbra Esporte Clube as middleman club.

Internazionale
On 30 January 2012, Juan Jesus joined Serie A club Internazionale. Inter disclosed the fee was €4M, but extra bonus clause was also reported. He made his first Serie A appearance for Inter on 13 May 2012, in the 3–1 away loss against Lazio after coming on as a last-minute substitute for Diego Milito.

Roma
On 14 July 2016, Juan Jesus join A.S. Roma on loan with a €2million in loan fees and a conditional obligation to purchase for an additional €8 million after a certain sport objectives. The obligation was activated in the mid of 2016–17 season; the club booked a loan fee of €1.153 million and an additional transfer fee €8.847 million in the financial report instead.