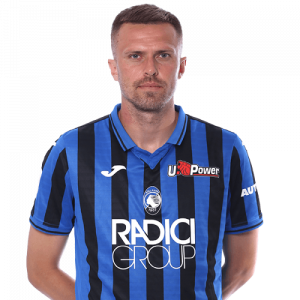 Josip Iličić is a Slovenian professional footballer who plays as a forward for Serie A club Atalanta and the Slovenia national team.

He began his professional career with Slovenian club Bonifika, later also playing for Interblock and Maribor in his home country, before moving to Italy in 2010 to join Palermo. In 2013, he signed for Fiorentina, and subsequently for Atalanta in 2017. He enjoyed his best time as a professional footballer with Atalanta, scoring eleven or more league goals in each of his first three years at the club and was awarded a spot in the 2018–19 Serie A Team of the Year. He is the first player to ever score four away goals in a Champions League knockout match, and is also the oldest player to score four goals in a Champions League knockout match.

Iličić made his senior debut for the Slovenia national team in August 2010 in a friendly match against Australia. Three years after his debut, he scored his first international goal against Cyprus in September 2013.

On 10 March 2020, Iličić scored all of Atalanta’s four goals in the 2019–20 UEFA Champions league round of 16 match against Spanish side Valencia, to secure a 4–3 win and help Atalanta progress to the quarter-finals. He also became the first player in the history of the competition to score four goals in an away tie of a knockout stage match, and the oldest player to score four goals in a single match in the competition at the age of 32 years and 41 days, surpassing Zlatan Ibrahimović. Iličić also received UEFA’s Player of the Week award after the Champions League round of 16 matches. Later in 2020, Iličić was nominated for the UEFA 50 Men’s Team of the Year.