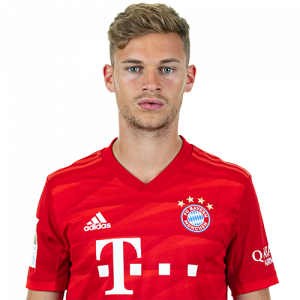 Joshua Walter Kimmich (born 8 February 1995) is a German professional footballer who plays as a defensive midfielder or right-back for Bundesliga club Bayern Munich and the Germany national team.

Known for his versatility, passing, shooting, tackling and aggression, Kimmich is considered as both one of the best midfielders, right backs and players in the world. He is often compared with former Bayern Munich captain Philipp Lahm and is considered his successor.

Kimmich joined Bayern Munich from RB Leipzig in 2015 for contract lasting until 2020. In the 2019–20 season, after winning the continental treble with Bayern Munich, Kimmich was included in the UEFA Team of the Year, the FIFA FIFPro Men’s World11, and was recognized as the UEFA Champions League Defender of the Season.

Kimmich started the 2020–21 season by acquiring the number 6 shirt, after Thiago Alcântara who had worn it for seven years departed for Liverpool. On 30 September 2020, he scored the winning goal in a 3–2 win over Borussia Dortmund in the 2020 DFL-Supercup. On 27 October, Kimmich scored the winning goal in a 2–1 away victory over Lokomotiv Moscow in the 2020–21 UEFA Champions League.